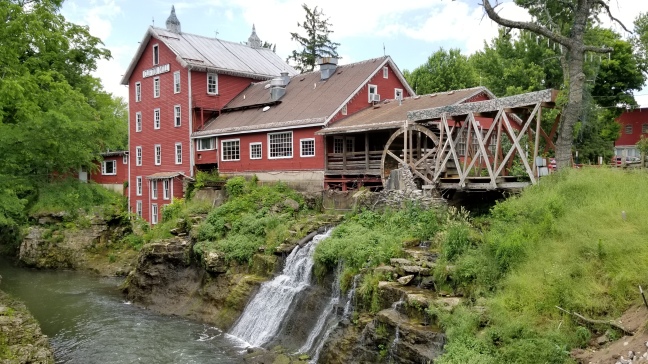 There are a wealth of quality day trip options from Columbus, given its central location within the state. Generally, if we’re in the hiking mood, my family opts for Hocking Hills or a nearby metro park. However, 45 minutes west of Columbus is the small town of Yellow Springs and a contiguous area of wilderness to its east comprised of Glen Helen Nature Preserve, John Bryan State Park, and Clifton Gorge State Nature Preserve. Yellow Springs is known as a hippie enclave in what is otherwise a pretty red part of the state. Its main street is occupied by book shops, clothing stores, and boutiques all promoting alternative lifestyles or free-spirited fun. I hadn’t spent much time in Yellow Springs, and things were opening back up after Ohio’s stay-at-home order was lifted, so a day trip was in order.

We started the trip with a morning hike. As far as Ohio state parks go, John Bryan State Park isn’t all that big. It has camping and playgrounds and all that jazz, but its hiking trails primarily follow the Little Miami River through Clifton Gorge. I had intended to start the hike closer to the entrance of the park, but kept driving until I reached the Orton picnic area, as far as you can drive into the park.

From the Orton picnic area, a short hike into the limestone gorge puts you more than 100 feet down along the Little Miami River. You can choose to turn right into the park or left into Clifton Gorge State Nature Preserve. Our plans included lunch at the historic Clifton Mill, so we headed left. The path continues along the river over mostly flat, but rocky and sometimes muddy terrain. The further you go, the more the gorge closes in on the river.

Eventually the trail heads up the cliff and meets with the Rim Trail. Here, the gorge becomes shallower and tighter until the Little Miami River squeezes into what is known as The Narrows.

We’d only been hiking for a little over an hour (you can make this hike longer by starting your hike closer to the park’s Lower Shelter) and it was a tad early for lunch, but Clifton Mill gets busy during the lunch rush, so an early lunch was in order. Established in 1802, Clifton Mill is one of the largest water-powered grist mills still in existence. The building has been a restaurant since the 1980’s, serving country cuisine and housing a gift shop. If there’s a long wait for a table, it’s still worth walking in for the store which has candy for sale. The land also has a covered bridge, and the restaurant puts on a gigantic Christmas light display every season.

This being June there were no Christmas lights, but it’s not every hike you have the opportunity to eat at a sit-down restaurant to replenish and re-hydrate before continuing on. In our case, continuing on meant heading back the way we came. If you want to include Clifton Mill in your itinerary, you can either do what we did and hike from the state park and make the restaurant your halfway point, or you can start hiking near the restaurant in the town of Clifton, go as far as you want into the park and come back and then eat when you’re finished. Either way, it’s best to avoid the lunch rush if you can. This place is popular.

We hiked back to the car and headed to Yellow Springs, which is only a couple miles away. The town’s main street, while not all that long, features a dense collection of restaurants and stores. If country food isn’t your thing, you certainly have lunch options in Yellow Springs including Ye Old Trail Tavern, HaHa Pizza, and others. Otherwise, your spiritual and political convictions will be validated, or challenged, as you stroll through the shops and snicker at the t-shirts, bumper stickers, and other accessories for sale.

Yellow Springs is also known as the home of comedian Dave Chappelle. There were no Dave sightings this time, but you never know who you’re going to bump into in this small town.

Our last stop for the day was for dessert at Young’s Jersey Dairy a couple miles outside of town. Another local institution much like Clifton Mill, Young’s Jersey Dairy is a working farm that has exploded into a can’t-believe-it-until-you-see-it kind of roadside attraction, with a dairy mart, restaurant, petting zoo, miniature golf, batting cages, and other random attractions that are either marginally or not at all related to dairy farming. It’s the kind of place you can do as much or as little as you’d like, though if you’re with kids you’re probably doing more. The main attraction is the ice cream, which you get from the dairy mart. They also make their own cheese and cheese curds. It’s really quite the family attraction and a good way to end a day trip if you haven’t already exhausted yourself with hiking and a stroll through town.

With ample hiking opportunities (Glen Helen Nature Preserve is at least, if not more charming than John Bryan State Park), small town quirk, and a puzzlingly-huge ice cream attraction, Yellow Springs and the surrounding area is one of the best day trips in Ohio. It’s rare to find such a diversity of things to do in such a small space. It doesn’t hurt that it’s only 45 minutes from Columbus and barely half that from Dayton.