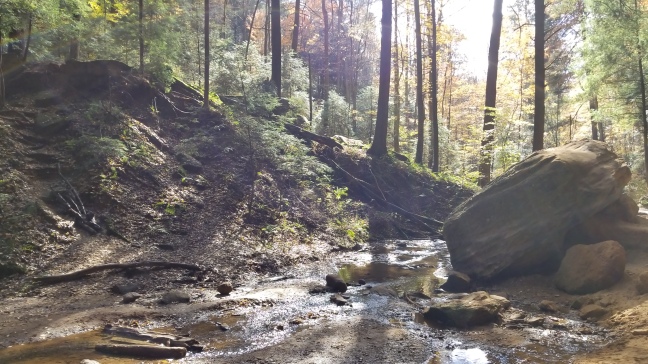 Ouch! It’s been a few months since my last post. I suppose that happens when you have a baby, then you buy a house, then you renovate said house…

Ohio is having a strange autumn this year. It was summer around these parts until mid-October, when we skipped the 70’s and 60’s and went straight down to temperatures in the 50’s.  The leaves made quick work of their colors to catch up, and with rainy, windy weather prevalent during the weekends, it was looking like we wouldn’t get much of a fall color season.

The first weekend of November finally brought good weather, so everyone and their dog headed to a park to catch what may be the only good weekend for fall colors. We decided to head down to Hocking Hills State Park to catch the colors at Ash Cave and Conkle’s Hollow.

Hocking Hills, for newbies, is probably Ohio’s favorite state park with its waterfalls and recess caves. Ash Cave, in particular, is the largest recess cave in the United States east of the Mississippi. Ohio nature doesn’t feature a lot of superlatives, but when it does…

Stunning, right?! In Ohio! Those who think Ohio is nothing but cornfields would do well to visit Ash Cave. The sun backlit the forest remarkably, highlighting the yellow fall leaves in the canopy. 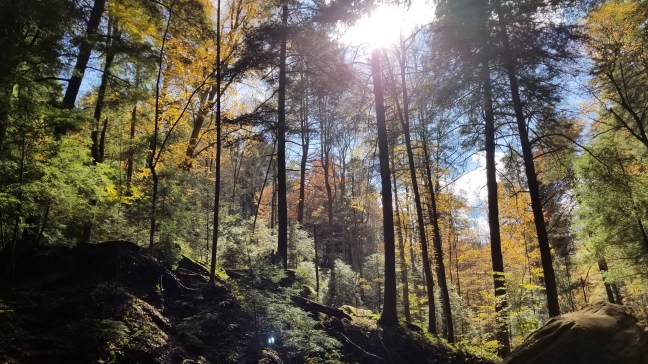 It has been a long time for me since an autumn hike was so well timed. The forest floor was nicely carpeted with yellow and orange leaves. When the breeze hit a tree just right, leaves blew off the tree and magically fluttered to the ground. The waterfall was also on point, with heavy rains throughout the week before.

The trail is super easy from the parking lot. In fact, much of it is paved to allow handicapped accessibility.

Equally accessible is the trail into Conkle’s Hollow, perhaps the deepest gorge in Ohio at 200 feet. The gorge closes in the further you go, until you find yourself in a magical, secluded Fern Gully.

A less impressive waterfall finishes the trail before you must turn back the way you came. This is an easy hike for families, so there were lots of kids on the trail, as well as parents with a little one strapped to their front or back. My son fell asleep in his baby bjorn, eliciting coos from moms and snarky comments from dads heading in.

Ohio gets a bad reputation for being ugly. While I admit there are plenty of more beautiful states, I’m betting that Ohio is much prettier than you think. Remember that east of Columbus starts the Appalachian foothills. Driving from Columbus to Lancaster on Route 33, you can literally see where the glaciers from the last ice age stopped, where the flat farmlands surrender to forests and rugged hills. It’s in this hinterland, only an hour and a half from Columbus, that Ohio takes a completely different hue. It will be a good place to remind my son, and myself, that he is blessed to live where he does, that our home is indeed beautiful.